This cemetery was first used in 1794 and is still an active cemetery.

A large number of the early settlers bought land in the northwest of Shelburne along the eastern shore of Shelburne Bay to the eastern border of Shelburne and north of the village. The headstones include the following family surnames: Barber, Blin, Chittenden, Gage, Hamilton, Irish, Lyon, Miner, Payne, Rowley, Simond, Slocum, Spear and Sutton.

These early settlers left their mark which is still visible in Shelburne today.

On July 5, 1813, Gersham Lyon quit-claimed one acre of land to the town for $1.00 to be a cemetery for the residents of Shelburne. 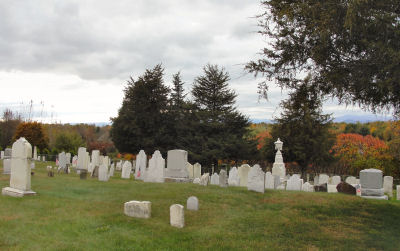