We now present the First Colleen Haag Public Service Award.  Many in town offered superb candidates from whom to choose.  It was a difficult decision, one made with careful thought.  It is a great honor and privilege to invite tonight to the stage as the first recipient of the Colleen Haag Public Service Award, a person who has given much of his life to help others, a volunteer in so many venues, a man who helps so many people, never taking, always giving, a man who exemplifies the enduring values of respect, integrity and honesty, a man who has served for more than 12 years in our Fire Department and continues to do so with Fire Fighter 1 Status.  He has led our Scouts of Troop 602 as Scoutmaster since 2012, he served on our Path’s Committee, he has led the Color Guard at Town Meeting and other events as needed, he works with our Veteran’s Committee, he cleans up invasive species along the river, he has built a path at a campground, he participates in book sales, he works with Veterans, he visits Park Service Headquarters with his troop, he has taken the Scouts to the unique Scouting Program Florida Sea Base, every year he takes Scouts to Tuckerman’s, every year he backpacks, camps, hikes and bikes, canoes with his Troop, he has taken the Scouts to a wonderful, meaningful trip to Normandy, Paris and London that allowed the Troop to carry 300 names of soldiers with them that were read while at the Normandy American Cemetery and Memorial in a Boy Scout Ceremony, he has led trips to the Lassen Volcanic National Park, Crater Lake National Park, Redwood National Park, Washington D.C., last year he led a 10 day trip to California and Oregon visiting three National Parks where the troop on two occasions were able to perform service projects for the parks.

Many of these trips are paid for by fund raisers from the community and through the Shelburne Boy Scouts Tree Sales.

There’s more.  Within the Fire Department, he serves or has served on the following committees: 75th Anniversary, Elections and Staffing. He often leads wildland firefighting training for the department.

Under his and other Scout Leaders, Troop 602 has given much to the Town of Shelburne.

In the time that he has been Scoutmaster of Troop 602, there have been 7 Eagle Scouts whose projects include the Press box/concession stand at the Little League Field, the picnic shelter at Davis Park, a bridge in the LaPlatte Nature Park and the shed at the Dog Park, a Bike rack at the Sailing Center in BTV, blankets for those in need, and Carnival games for Camp Ta Kum Ta.

Every trip led by this man comes with large educational & community service components, for example, before the Normandy Trip, the troop first learned from WWII veterans (some Shelburne residents) about their experiences in the war.

And in preparation for the National Parks trip, the troop spent an April vacation in Washington, DC, where they met with the head of the National Park Service and helped with conservation related community service projects.

Giving back to our community is paramount to this man and his role as Scoutmaster, he ensures the boy scouts are available to help when needed.  From moving lots and lots of boxes of books for the annual Library book sale, to performing Color Guard duties (here tonight and many other town events) Troop 602, under the guidance of this man, is here for our community.

This man works a day job too - as the Cultural Heritage & Recreation Coordinator with the Lake Champlain Basin Program.  He was integral in the success of the Quadricenntial (Celebrate Champlain events in 2009), Shelburne’s 250th, and the Fire Department’s 75th anniversary.

With our thanks to the recipient of the First Colleen Haag Public Service Award, on behalf of the Selectboard, on behalf of our Town, I ask you to recognize with me a man who exemplifies the spirit of public service, who has shared time, talent and energy for the betterment of our community, who inspires purpose, who drives lasting solutions, someone who makes a difference.  Please join me with thanks to Jim Brangan. 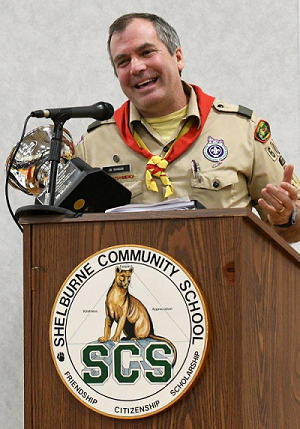